It was one of the hottest days of the year, the football World Cup Final and the Wimbledon men’s singles final but where would you find our dedicated dancers? At a dance competition of course!

It was the ISTD Northern Area qualifier, which for some presented another chance to qualify and for others a chance for some pre Blackpool match practice.

As usual we began with the Juvenile and Junior events with Kaitlyn, Luke, Chloe, Ellie, Isobel, Paige and Shanae all in action today. Even Tommy decided he wanted to grace the floor and join in the fun, securing a fourth and second place in the two events he entered. Shanae looked lovely in her new Junior dress having recently made the move up from the under 12 year’s section. Kaitlyn made both her finals as did Luke, Chloe, Isobel and Paige. Ellie made the final of her Latin event dancing the Samba, a tricky dance at any age, and so secured a place in the Qualifiers event at Blackpool. Chloe, Paige and Isobel all secured first places and in the couples events, Luke and Chloe were placed second in their ballroom and Latin events dancing Paso Doble in the latter, a dance which they actually hadn’t danced together before! 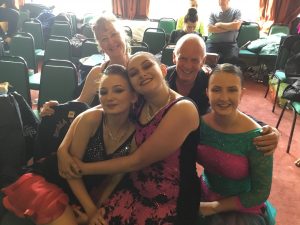 The sequence events followed and these often prove to be the most competitive sections of the day and today was no exception. Chloe managed to secure second place in her event whilst Paige was placed fifth in her’s.

There followed a parent and child Cha Cha Cha 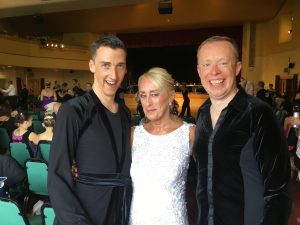 competition and a number of our plucky parents took to the floor, most having no previous experience. Of course it didn’t show at all! Nevertheless they all entered into the spirit of the event and some managed to get recalls. Chloe and Jemma made it all the way to the final finishing in fourth place. 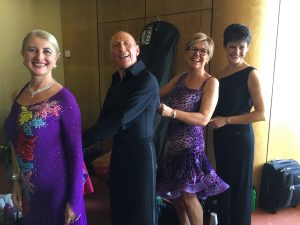 Following all this excitement it was the turn of the adults to show us what they could do. They started with the sequence events and Josh, Grace, Olivia, Chris, Neil, Serena, Carla, Andy, Allison, Dennis and Dawn all made their respective finals with Serena securing a win in her event.

Next came the ballroom and Latin events and relative 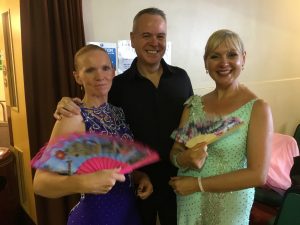 newcomers, Carol and Peter made both their finals from one of the largest entries of the day, being placed second and third in the ballroom and tieing for third place in the Latin. There were wins today for Grace P, Chris, Libbie, Serena, Carla, Neil and Dawn and more importantly, those needing to still qualify in some events all managed to do so. Well done to you all. 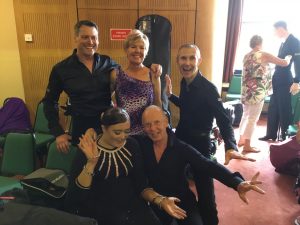 An enjoyable and successful day once again for the 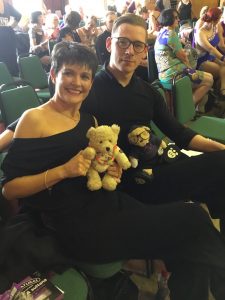 team then and a huge thanks to Liam for making the journey up from London to help out once again as well as those who partnered in addition to competing themselves, Josh, Grace P, and Emily.

Boris was excited to meet up with his old chums for a final get together before he jets off for his Summer break to Bearmuda (by British Bearways of course) and looks forward to seeing you all again after the holidays, fully refreshed and raring to go for the final push before Blackpool in November.

This year we have an extra Qualifier event on 9th September, which was the event previously held in December and is now confirmed to be moved to this date. This will be a good opportunity for some match practice ahead of Blackpool especially for those who have not been out for a while.

Thank you to all those who guessed both on line and otherwise. Our Blogger this time was Hazel, correctly identified by Chris and Ruth although Chris was the first correct one posted and so wins the prize.

Hope you enjoyed the post and thank you to Hazel for your report.