The final competition before the summer break was a Blackpool qualifying event, this time at Castleford near Leeds. The advantages of Castleford over the usual venue of Pudsey is that as it’s closer we got an extra half hour in bed but it does have the challenge of the octagonal dance floor. We were a reasonably large group, although there were a few absences due to holidays and one group were unfortunately left stranded on the M1 with a puncture. We also had a few new members to the qualifying team and everybody was very welcoming to Ellie, Shanae, and Charlotte Brightwell. 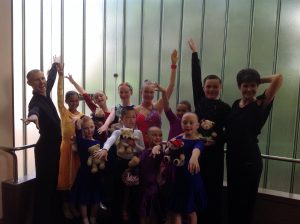 Within the children’s individual events, the results were positive, thus there being many final places including Kaitlyn, Ellie, Shanae, Paige, Chloe, Luke, Jack, Isobel, Grace S, and Leila, many of these being first places. The overall results of the individual children events were high, which resulted in many trophies. All competitors within the children’s individual Ballroom and Latin events reached the final with many results being first, second, and thirds.

As the morning progressed, a fun competition was 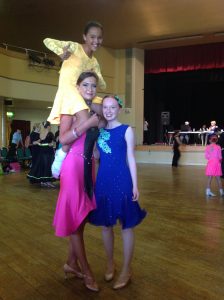 introduced to all competitors, which included three people, one being under 12 yrs, one between 12 and 16 yrs, and the other being an adult. This dance consisted of CCC, however one competitor had to have no feet touching the floor at all times. This resulted in Grace, Grace, and Leila winning first place, followed by a third from Jack, Karly, and Chloe, with an addition of Paige, Shanae, and Charlotte also competing. 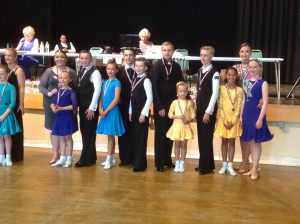 As for the Juvenile and Junior sequence three dance, all of our competitors had danced to their best abilities and in doing so achieved high results such as seconds. The juvenile sequence being Washington Two Step, Woodside Waltz, and Let’s Jive; all reaching the semi finals. The junior sequence three dances being Windsor Glide, Emily’s Foxtrot, and Shoebury Samba resulted in finals from both Jack and Leila achieving high results. Adult sequence also resulted in high places such as second, third and fourth places. Everyone danced the final in the over 35yrs, with final places in the over 50yrs and Emily reaching the final in the under 35yrs. 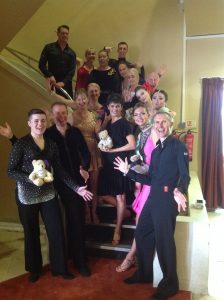 Once the children had collected their results, it was the adults turn for their individual competitions. All competitors had reached their finals in their Ballroom resulting in high positions such as firsts, seconds, and thirds. This was also the same case within the Latin with firsts from Charlotte Be, Craig, Hazel, Allison, and Neil.

The adult couples all reached the finals, with all competitors presented with either a first, second or a third. These being from Craig & Emily, Karly & Charlotte Be, Chris & Serena, Josh & Grace P and Neil & Carla. The chosen dances for adult couples were Tango, Waltz, Rumba and Samba, these being more difficult than other couples competitions; however this did not push any of the competitors off track, and fortunately achieved many firsts.

As always, days like these are a team effort. Firstly, thank you to Emily, who has written this blog (she is with us this week on work experience). Also, thank you to those who partnered on Sunday. For varying reasons we were without our usual team of Luke, Ruth, Liam and Alex, therefore Josh and Grace stepped up to the task and carried it out very efficiently. Also, to all chauffeurs, supporters and financiers, you are all crucial.

We have a few more weeks of hard work before the summer break, in which to consider a few more finer points of technical detail. We can then all recharge our batteries and return ready for some hard work (and fun) in the autumn term. We have Chesterfield open sequence event first week back, Whitby in October and various other sequence events, prior to the British Sequence Championships in October and ISTD Grand Finals in November, both of which are in Blackpool. Then, without, hardly a pause for breath we will have NATD exams and Strictly George Spencer.

As this is probably the final blog before the break,

Boris would like to take the opportunity to wish you a happy summer and to thank you for your hard work, dedication and loyalty over the last term and hopes you are looking forward to the next term. He is currently packing his shorts (Bearmuda style of course) ready for his break.

The Mystery Blogger appeared to cause some difficulties this time with most people completely on the wrong track. However it was a joint effort this time by Isobel and Chloe so thank you for a detailed and well written report.

Well done also to Hazel who was closest and so has been awarded the prize.

Look out soon for a report from Castleford.