Well here we are at Blackpool again for the British Sequence Championships but not quite as we know it. Due to the ongoing roof issues in the Empress Ballroom we were relocated to the Spanish Hall, which is a beautiful ballroom upstairs in the Wintergardens complex. Whilst the dance floor was much smaller than we are used to the room had a lovely atmosphere and as usual our team of dancers and supporters provided great vocal support for each other.

Sunday commenced with the Social Open Modern Sequence event, the Senior Classical Championship and the Amateur 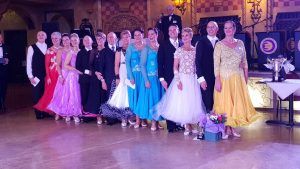 In the Senior Championship, Stuart & Andrea were recalled to the final and were highly delighted to achieve runners up position.

Josh & Grace danced their first British Amateur Championship, as last year they won the social events. This is a huge ‘step up’ both in terms of complexity of dances and standard of dance required. Therefore, we were all very satisfied when they were recalled to the final and came 6th. This event was particularly special as two of the test dances were arranged by Robert and myself and one by Luke.

It was then on to Monday, which meant the Over 35yrs Social Classical event and the Professional Inventive dance competition. All

six members of our team, Dennis, Sue, Andrew, Dawn, Neil & Carla were delighted to reach the final and were placed a very well deserved 5th, 4th and 2nd 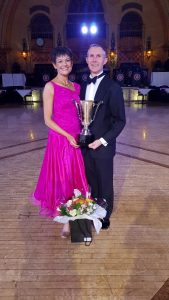 I’m also pleased to report that Robert and I were successful in the Inventive dance competition and won with our Milwaukee Waltz. We are very proud to have now achieved the most ever Blackpool inventive dance winners with this being our 16th win.

All too soon it was Tuesday and the last day of the festival. Stuart & Andrea danced in the Senior Modern Sequence Championship and Josh & Grace in the Amateur Classical Sequence Championship. Both couples gave sterling performances and tried their very hardest. Stuart & Andrea were recalled to the final and managed to repeat their Sunday evening performance by taking the runners up position again. On this occasion, Josh & Grace although close to the final did not quite make it this time. They did however dance their best and are already looking forward to the next set of challenges.

Overall it was a fabulous few days. All the ladies had beautiful new dresses which looked amazing (the Gentlemen didn’t look too bad either!). As a team we had some super results with everyone achieving at least one of their personal goals. My overriding memories of the festival was the great camaraderie and team spirit shown by everyone. Whilst everyone was very focussed on achieving their own goals they also showed great support to all other members. Also, over the few days we had a few surprise visits from supporters which was a lovely gesture.

On a final note, I passed the back door of the Empress Ballroom on several occasions and each time there was drilling and hammering coming from inside so hopefully plans are on track for the reopening at the beginning of November.

It’s October so that means our annual trip to the seaside for fresh fish and chips and of course the social ballroom and Latin couples competitions. The spa at Whitby is a lovely ballroom; it has a large wooden floor and looks out from its cliff top position onto the beach and sea. Through the large porthole windows we can watch the ships sailing past. I would totally recommend the trip to anyone who gets the opportunity.

It was a bumper turn out today with most of the first rounds being danced in either two or even three heats. Therefore, any recalls, never mind final places had to be worked for. We were an all adults group today, made up of some regular attendees and some first timers to Whitby. Everyone looked lovely and ready for the challenges of the day ahead.

In the ballroom events there were four rounds in the Open Adult Waltz and Quickstep competition. Andrew & Dawn, Dennis & Sue and Chris & Serena danced three rounds to reach the semi final. Making the final round were Paul & Karen and Craig & Karly, coming 5th and 6th respectively.

In the Under 35 years Quickstep there were three rounds. Making the final were Paul & Karen and Craig & Karly, coming 4th and 7th respectively.

In the Over 35 years event there were only three couples but Chris & Serena danced the tricky Slow Foxtrot to finish in first place.

In the Over 50 years Waltz there were seven couples and our team couldn’t have done any better as Andrew & Dawn came first with Dennis & Sue second.

It was then time for the sequence section which was an Open Adult Saunter Together. There were 24 couples in the first round and everyone made at least the semi final, with Paul & Karen, Craig & Karly and Andrew & Dawn being successful in reaching the final. Paul & Karen secured 4th place then Craig & Karly and Andrew & Dawn became inseparable and achieved a joint 5th place.

The sequence section also had an open ‘fun’ Square Tango event. This could have been seen as a bit of a conundrum as how do we have fun in the tango!! However, it was the largest event by far with about 70 couples starting off. Along with our regular competitors Rob (Karly’s Dad) & Julie (Craig’s Mum) took to the floor and secured a recall to the second round. Well done on your dancing and entering into the spirit of the competition. Sue & Dennis also decided to bring about the changes as they reversed roles and it has to be said Dennis held his elbows up extremely well in the follower’s role!!! After five rounds, Paul & Karen came out victorious with leader Sue and follower Dennis coming into second place.

After the prize presentation for these events it was nearly 5pm and thoughts were starting to drift towards my fish & chips but there was still the Latin section to come so focus had to be regained for a few more hours.

In the Under 35 years Cha Cha Cha there were 14 couples, Craig & Karly reached the semi final and Paul & Karen reached the final, securing 6th place.

In the Over 35 years Rumba, there were the same three couples and Chris & Serena made it a double by also winning this event.

In the Over 50 years Cha Cha Cha there was again seven couples. We secured 1st and 2nd spots again but this time with a reversal of fortunes with Dennis & Sue winning and Andrew & Dawn taking the runners up position.

In the Open Adult Rumba and Jive competition, Craig & Karly and Paul & Karen reached the final. Being placed 4th and 5th respectively.

In conclusion, the day had a lovely atmosphere with some great music, dancing and of course fish and chips for supper.

It’s now full steam ahead to the British Sequence Championships at Blackpool next weekend and then two weeks later the ISTD Grand Finals. Can we take this opportunity to wish everyone the very best of luck at both these events. For those of you who may not have heard there has been a partial collapse of the ceiling in the Empress Ballroom at Blackpool. This has been a major concern to the dancing world but repairs are underway and we have received clarification that the sequence festival will be held in the Spanish ballroom in the Winter Gardens complex but that the Empress Ballroom will be reopened in time for the ISTD event. This has been made possible by a false ceiling being erected with scaffolding roles holding it into position. Therefore, it is not a totally ideal situation but we are exceedingly grateful to be given access to the ballroom at all and we’re sure it won’t spoil a fabulous weekend.