It was a small but dedicated team that ventured to the NATD competition, only two weeks after all the excitement of Blackpool. This is the last competition of the year and so is usually quite a relaxed affair. Better still it was only at Sandiacre so we didn’t have to set out too early in the morning! It was also one of the coldest mornings so far this year and we had to scrape ice from the car windscreen before we set off. Boris was certainly pleased to have his jumper!

We may have been few in number but nevertheless our dancers were on form, winning nearly every event in which we had someone entered. 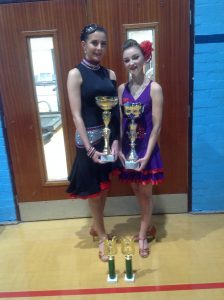 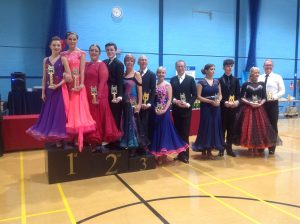 Many of our dancers were in action again in the adult and child events, partnering children from other dance schools. With the largest entry of the day, Andy was the only one who made a final with his partner, finishing 6th. 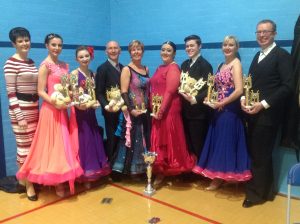 An enjoyable and successful day was had by all and Boris remarked that it was nice to have a relaxing day following the full on experience which is Grand Finals! With exams next week followed swiftly by Strictly Reunited there is plenty to keep us busy before we all prepare to take a well deserved break over the festive season. Well done everyone and I’m sure you are all pleased to have made the effort to go. 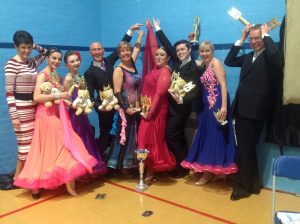 It took twenty six (yes 26) hours of cometitions for it to happen and then it did, – we got our first winner of 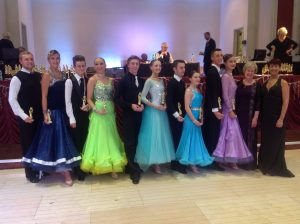 the weekend – Josh and Grace won the under 35 years silver/gold waltz. Huge congratulations.

It was an extremely long and very tough weekend. The Empress Ballroom was reopened just for our event. The ceiling and scaffolding towers are a feat of engineering, some may even call it art, the dance floor was relaid, chairs squeezed into every available space, Disney themed decorations and special lighting effects created to mask the towers and after much speculation, concern and hard work at 8.30am Saturday morning the competitions began. The next twelve hours were taken over by the children’s events. The team this year consisted of Kaitlyn, Luke, Ellie, Shanae, Chloe, Grace S, Isobel, Paige, Molly, Jack, Olivia and Leila. Everyone looked lovely – beautiful hair, makeup, shoes and clothes. There were a few nerves and a little over excitement at the start of the day, due to the scale of the event but everyone achieved at least one recall. 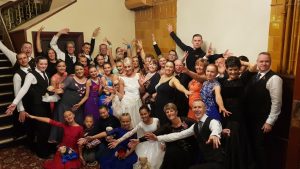 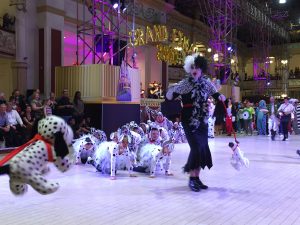 After all the hard work, Saturday evening was a time to relax and unwind at the social dance. This year’s fancy dress theme was Disney and a large group of our children, parents and adult dancers teamed up to recreate 101 Dalmations. Martin was a sight to behold as Cruella and whilst we might not have quite reached 101, the dogs certainly took over the parade. I was just a little worried about 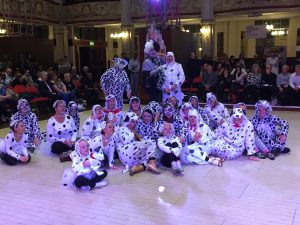 the future dance results of the person who tiddled up Nicky’s leg!!!!!  but I’m very relieved to be able to report that she (clue) had a first class set of results on Sunday. 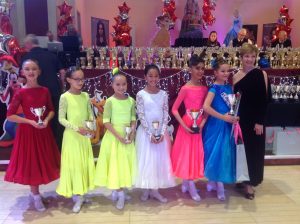 All too soon the 5.30am alarm was ringing Sunday morning and off we went again. The first round was 8.30am and I’m pleased to say everyone was ready, alert and raring to go. The first events of the day were the sequence where we had a very good set of results.
In the juvenile, Chloe reached the semi final. Isobel and Grace S then made it to the final,  Isobel coming a highly delighted 6th and Grace an extremely proud 3rd.
In the junior section Jack and Olivia reached the semi 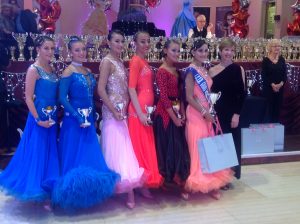 final and Molly achieved a final placing, coming 6th. Very well done.
Then we had the under 35 years sequence, which is an especially tough category. Getting a recall were Emily, Alexander, Paul, Libbie and Charlotte B and making it through the semi final and then the final were Josh and Grace. They were placed 7th and 4th respectively. Well done. 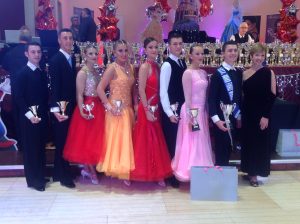 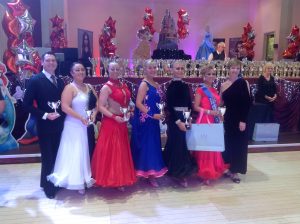 In the over 35 years sequence Chris had a recall to the semi final and in the final were Neil, Karen and Serena. They were placed 6th, 5th and 3rd respectively. Well done again.
In the over 50 years section we had a wealth of dancers. Getting a recall was Geraldine. Then into the semi final were Sue and Christine and onto the final were Dawn, Carla, Dennis, Allison and Andy. They were placed 7th, 6th, 5th, 4th and 3rd.
The sequence is the genre we pride ourselves on excelling in and as you can see from the wealth of recalls, semi final and final placings this year was no exception.

It was then onto the rest of the day with individual ballroom and Latin events. Everyone got at least one recall in this section, with 17 semi final placings and 7 final spots. These were awarded to Charlotte B in both 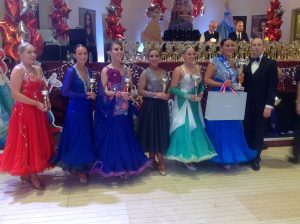 her quickstep & cha cha cha, both 5th places. Grace P achieved 2nd in her foxtrot, Sue 5th in her tango/quickstep, Serena 5th in her jive, Allison 6th in her

Geraldine 4th in her

Eventually at 9.00pm (yes, thirteen hours after the first competition of the day), we reached the couples events. This is a lovely way to finish the weekend because the teachers and partners get a chance to sit down with a glass of wine, no no I mean because it lifts everyone’s energy levels back up for some super dancing to finish the day. This year’s pairings were Alexander & Libbie, Craig & Charlotte B, Karly & Emily, Josh & Grace, Tony & Hazel, Peter & Carol, Chris with both Serena and Allison, Neil & Carla, Dennis & Sue and Andy & Dawn. Everyone got at least one recall, with final placing going to Josh & Grace (1st & 3rd), Neil & Carla (2nd & 3rd), Chris & Serena (3rd), Dennis & Sue (4th & 7th) and Andy & Dawn (2nd & 5th), Craig & Charlotte (6th)

As I have said it was a very long weekend and just to be able to say you were there, either as a dancer, parent, friend, partner or supporter is a huge achievement and one which we are, and hope you are also, proud to have been part of.  Weekends like these remain part of you forever and become one of those life experiences which you quote for years to come.  New ‘character building’  moments were experienced, new friendships were made, there were lots of laughs and probably a few tears but overall we hope you all thoroughly enjoyed the experience. 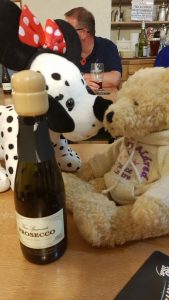 The weekend would not be possible without the incredible time and effort given by those who partner. Luke, Liam, Alex and Ruth. Thank you so very much. Also to Emily & Josh who stepped in a couple of times. Both of which resulted in their partners reaching their finals.

We are exceedingly proud of you all – the effort everyone puts into not just their dancing but their hair, makeup, dresses, suits, timekeeping, organisation, behaviour and support for one other is something which cannot ever be underestimated.