A week on from Blackpool and off we set again. This time to Castleford, near Leeds for an ISTD qualifier event. This week there was no snow, no road closures and I wasn’t stopped by the Police, so in comparison it was rather an uneventful journey! 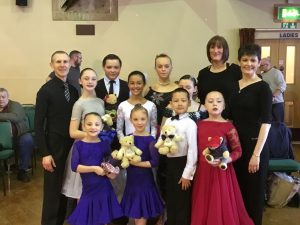 The day itself, though, was anything but uneventful. The statistics speak for themselves – 31 dancers, 23 supporters, 30 first place positions and 33 Blackpool qualifications. It was commented on that we were the best dressed school

and at the end of the day Miss Byron, the compere and organiser, congratulated our school for the true team spirit shown with everyone clapping and cheering each other along.  We also thought that everyone danced well with a lot of

improved performances and signs that points which had been worked on in lessons for sometime, now being shown on the competition floor. Well done to you all, sometimes these comments and observations are more important than the results.

Nevertheless, my report would not be complete without the results. The day started with the Children’s ballroom and Latin events, where wins were recorded for Grace S in her Waltz, Paige in both her Tango and Jive, Chloe in her Jive, Isobel in her Jive and then in couples Luke & Chloe in their Quickstep and Jive.

It was then time for Sequence, where Grace S, Chloe and Isobel danced three times to ultimately be placed 1st, 2nd and 3rd respectively. The under 35yrs was, as always, a very hard fought event with recalls for Josh, Grace P, Emily, Craig, Karly and Charlotte Be. With semi final places to Josh, Grace P, and Emily. Then reaching the final and being placed 4th and 2nd respectively were Josh and Grace P. There were larger entries than usual in the over 35yrs. With a win being achieved by Paul, closely followed by Neil in 3rd, Karen in 4th and Serena in 5th. In the over 50yrs, again there were three rounds, with semi final spots being taken by Dennis, Sue, Allison, Geraldine, Christine and Carla. Progressing through to the final and being placed 2nd, 3rd, 4th and 5th, were Dennis, Christine, Sue and Carla.

In the couples events we also had great success, Craig & Emily won the Quickstep, with Karly & Charlotte Be securing runners-up position. Chris & Serena won their Quickstep with Peter & Carol 2nd. Josh & Grace P were 2nd in their Foxtrot with Paul & Karen 3rd. In the over 40yrs Silver/Gold Foxtrot, Dennis & Sue were the only entrants but they gave a lovely controlled, well timed demonstration of the foxtrot as the sole couple on the floor. In the Latin couples there were wins for Craig & Karly in their Jive, with Emily & Charlotte Be in 2nd position. Peter & Carol won their Jive, with Chris & Serena in runners-up spot. Josh & Grace P were 2nd again with Paul & Karen 3rd. Neil & Carla won their Rumba with Dennis & Sue following closely behind.

Overall, to conclude it was a successful day from both the dance performances and results achieved. Thanks, to Liam and Ruth for their dedication to come along and partner, we couldn’t do it without you. Also, to Josh and Grace P, who are also now stepping up more to the challenge of partnering.

Some dancers are out again next Sunday at a couples sequence event. Others have two weeks to prepare for a highlight on the dancing calendar – our event at Westpark. Dancers, parents, wider family and supporters will be turning out in force, make sure you are ready.

p.s. Boris has been comforting the bear which was abandoned yesterday and whilst he is coping well, he’s promised him that he will be returning home tomorrow.

A few months ago it was announced that a couples competition was being organised at the Blackpool Tower ballroom.  This was the first time dancers would have the opportunity to compete here since the last event moved away in 2010, so we were obviously excited at the prospect.

It turns out we weren’t the only ones. In January all seats were sold and an extra 300 shipped in and by the day standing only tickets were being sold, we would be in for a marathon.

The children’s events commenced at 8am, when we entered the ballroom at 2pm, they had already been dancing for six hours. The place was packed, everyone excited and the atmosphere amazing. The adult dancers had been advised that due to huge entries they wouldn’t start until 8pm. The first sequence event was at 9.19pm with the prize presentation taking place, as per timetable, at 12.20am.

During that time Stuart and Andrea secured second place in both the Senior Modern Sequence  Senior Classical Sequence Grand Prix events. These were hard fought competitions and to secure two second places was a brilliant achievement.

In the social modern sequence there were three rounds. Chris and Allison achieved a well deserved recall to the semi final.  Neil and Carla came fourth and Andrew and Dawn sixth.

In the over 35yrs Classical Sequence, Neil and Carla came second and Andrew and Dawn third.

Everyone danced above their normal level, inspired by the amazing setting and history of the occasion.  It was a true first that everyone will remember being there for.

I’m sure there were lots of very tired people on Monday (and probably Tuesday as well!) but come next year we’ll all be there again not wanting to miss the privilege of dancing at such aworld renowned ballroom.