The “Blackpool” season kicked off this week with the British Sequence Championships and Boris knew he was going to have his paws kept busy with all the action over the four day event. Participating were Josh & Grace, Stuart & Andrea, Neil & Carla, Andrew & Dawn and for the first time at this event, Chris & Allison and Craig & Emma. 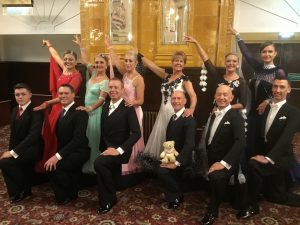 The Wintergardens always inspires dancers to perform to the best of their abilities and few get to experience competing in this fabulous, historic ballroom to a live orchestra.

On the first day all couples were in action and all produced great performances. Josh & Grace cemented their place in the final of the modern sequence Championship, a position they claimed last year, and finished 6th in a strong

final. It was a close fought final and Neil & Carl were highly delighted to finish 2nd whilst Craig & Emma came a very respectable 3rd, an excellent result for their first outing at this event. Furthermore all of the first three couples won one dance showing what a close final it was. 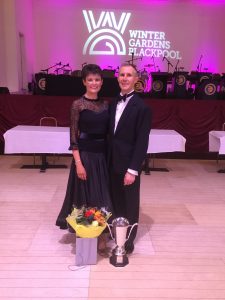 The Monday of this festival takes in the Inventive Dance competition and Louise and I were pleased to be successful in winning once again with the Waldorf Waltz taking our total wins at this prestigious event to 17, a record unsurpassed by anyone. Having been competing in the Inventive Dance competitions for over 20 years we took the difficult decision that we would retire from these events but take away many happy memories.

Also in action once again were Neil & Carla, Andrew & Dawn and Chris & Allison in the Over 35 years Classical sequence. As expected the competition would be hard fought but our dancers were up to the challenge with Chris & Allison making the semi-final and the others reaching the final. It was another close contest and Neil & Carla were once again pipped to the top spot but taking a first place in the Saunter on the way and Andrew & Dawn ended close behind in 3rd place.

The final day of the festival came all too quickly, 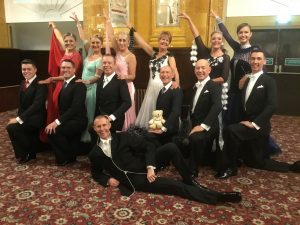 although it seems as though a day in ‘Blackpool time’ is equivalent to a week elsewhere. Josh & Grace, Stuart & Andrea and Craig & Emma all had events today and they all performed magnificently. Stuart & Andrea finished 3rd in their modern sequence

Another successful weekend with lots of positives but also some leaning points. Boris expressed that he was very proud of you all but was a bit lonely having to do all the “mascotting” by himself since it was a very long and tiring weekend for one small bear. Back to the hotel bar then to relax, reflect and reminisce on another enjoyable festival.

There’s hardly time to catch breath and it’s off to Blackpool once more for the ISTD Grand Finals weekend, here’s hoping to more successes as well as another chance to catch up with friends. 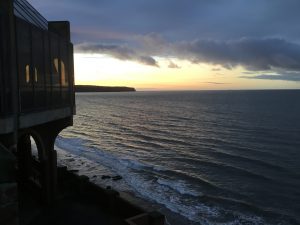 Whitby, famed for fresh fish, rugged coastline, Captain Cook, Dracula and of course dance competitions at the lovely, spacious Spa ballroom. We are usually a small party who regularly attend this event but there is always a relaxed and enjoyable atmosphere and of course the chance to sample the local cuisine.

In attendance today were Dawn and Andy, Chris and Serena, Paul and Karen and Craig and Karly along with a team of dedicated supporters. There was a good
attendance today across all grades, with some experienced competitors, so it was not going to be a walk in the park (or even along the beach!). In the
open events there were a couple of recalls before the finals and so those who made these finals did particularly well today. 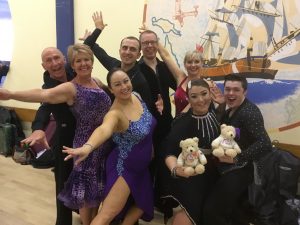 So the roll of honour was as follows:

Paul and Karen were placed first in three of their events and finished second in the open ballroom event and fourth in the open Latin event. Paul also won the “fun event” dancing with Dawn.

Andy and Dawn won two of their events and Andy was placed second with Karen in the “fun” competition. Andy was also awarded a lollipop by the organiser
for “best supporter”.

Chris and Serena were placed second, third and fourth in their events and also made the final of the open adult ballroom event. Chris and Craig came third in the “fun” competition completing a clean sweep of the podium places in this event.

Craig and Karly had a second and two third places in their events and also made the final of both the ballroom and Latin open events being placed a
respectable fourth and fifth respectively. 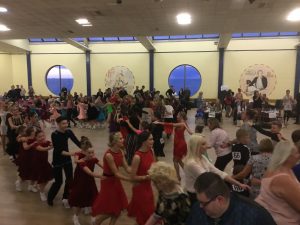 So, as we come to expect, another successful day for the team and one which I am sure was enjoyed by all attendees, especially Boris who got a big box
of biscuits. Having got the fun part of the day out of the way, we got down to the serious business of sampling the local fayre at the Magpie Cafe. Fish and chips always seem to taste better at the seaside and the Magpie
definitely produces some of the best.

We have two Blackpool trips looming, this weekend is the British Sequence Championships where we have six couples in action and then of course we have the ISTD grand finals. Boris has a very busy fortnight ahead on mascot duty but is looking forward to supporting everyone and seeing all members of the team perform their best.