Hot on the heels of Blackpool was the NATD trophy day at Friesland Sports Centre. We had three dedicated 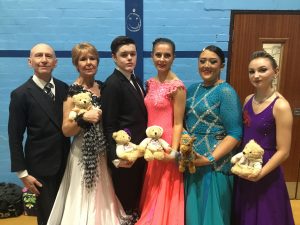 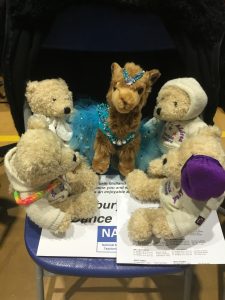 We also welcomed Arabella on her first official outing as an “honorary bear” and she had certainly dressed for the occasion. Whilst a little nervous at first, Boris thought she coped admirably and will make a welcome addition to the team.

The on floor action began as usual with the ballroom events and in the open foxtrot and tango competition all three couples were recalled to the final. The event was won by Molly & Emily with Craig & Karly finishing in second and Dawn & Andy fourth. 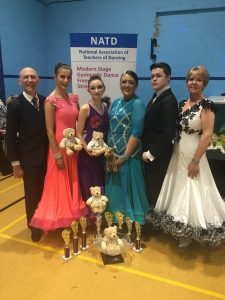 In the under 35 years event the situation was reversed with Craig and Karly winning and Molly & Emily finishing second, whilst in the over 35 years event Dawn & Andy finished second.  The Adult and Child Waltz then followed and not having any children there today our dancers teamed up with young dancers from other schools. From a large entry both Andy and Molly made the final finishing 5th and 6th respectively. 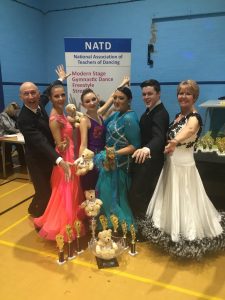 The Latin events followed and once again all our couples made it to the final of the open event with Craig & Karly winning, Emily & Molly second and Dawn & Andy sixth.    The pattern was repeated in the under 35 years event with Craig & Karly securing victory and Emily & Molly taking runner up spot. Dawn & Andy once again finished second in the over 35 years event.

Although a small day by the standards of some events we attend it was nevertheless an enjoyable one and had a relaxed and friendly atmosphere. The “Three Degrees” ( Julie, Janet and Beverley) kept us entertained all day with their dance routines and even brought the admiration of the compère.

A good day was had by all and also, as it was nice and local we were all home early. The next major events will be the NATD exams in two weeks followed by the Christmas Party (can it really be that time already!). Keep a look out for more posts soon.

One thought on “Fantastic Friesland”